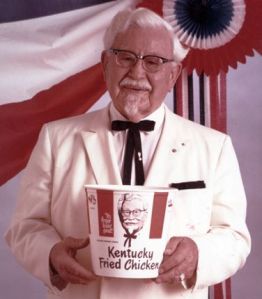 So you started your career life by dropping out of grammar school and worked as a farm hand. That led to a “horse carriage” painter. Still not happy, you move on to a street car conductor.

All of this turmoil by the ripe age of 14. Life is rough!

Let’s keep going…steam engine coal stoker, that didn’t work out, and somehow, you earned a law degree at night school. They forgot to tell you to not brawl in court with your own client. Disbarred and not allowed to practice law, so you became an Insurance Salesman. Insubordination leads to another dismissal and you are only 30 years old.

Are you ready to give up?

Let me fast forward after a series of minor successes and failures to the age of 65. Armed with the knowledge of cooking, a background in sales, and the tenacity (and resiliency) of a bull, you see the future of a food chain that can be branded and differentiated with southern fried chicken. At this point, you know in your heart of hearts that franchising is the future. This is not a well- known business model in 1952. By the way…you are sleeping in the back of your car and you have $105 a month coming from Social security.

You beat the pavement and visit anyone who will listen. The “secret” herb and spice recipe as well as a unique way to cook the chicken starts to get traction. Eventually the potential franchisees come to you and the path is paved.

We all know the rest of the story, but this is the background and history of “Colonel” Harland David Sanders, aka Colonel Sanders.

Let’s look at one more before I make my point.

From a 12 year old drunk to Golf Champion.

Sometimes, you need a mentor to help. That is the case of Golf’s most recent royalty and winner of this year’s US PGA Championship, Jason Day. Day’s lifelong mentor, after his father died, was Colin Swatton.

Day grew up poor, and remembers watching his mother cut the lawn with a knife because we couldn’t afford to fix the lawn mower. In a recent interview, Day recounts  “I remember not having a hot water tank, so we had to use a kettle for hot showers. We would put the kettle on and go have a shower, and then my mom would come bring three or four kettles in, just to heat them up. And it would take five, 10 minutes for every kettle to heat up.

Talking about Swatton, Day says ” I mean he’s taken me from a kid that was getting in fights at home and getting drunk at 12 and not heading in the right direction to a major champion winner”. Of course this didn’t come without a work ethic, and constant practice and psychological reconditioning. He used books by Tiger Woods as his bench mark. His ritual was practicing three times a day for years. He knew this would pay off. Swatton was with him every step of the way as his coach and by his side as his “caddy”.

Life will throw you curve balls

Sometimes it will seem like that’s all you get…”lemons”. It’s the knowledge, tenacity, resiliency, and strength to change this into lemonade. One must realize that this is life. Everyone faces adversity at some point. Ok, maybe some more than others! But knowing this phenomenon and being able to “weather it” is what will separate the winners from the non-winners.

As always (if you read my past blogs), I challenge you to stay strong. I urge you to master your own thinking and mind to your advantage. You have full control of how your process these life events and challenges. Your path is set by you, and it’s never set in stone!

One thought on “Only you can set your path…and nothing is set in stone!”