You know what else is lost? Those priceless medical records; “The history of you on paper”.

If there was ever a reason to argue for at least digitizing records, this last month was it. What will all those who aren’t on electronic medical records (EMR) do? Electronic records are easier to recover than paper, but wait; you’re not out of the woods yet. What if water got into electronic records, swept them miles away into the sea; or worse…well you get the idea.

The whole idea of cloud-based electronic records was born out of the need for improved information, cost and time improvements, and overcoming geographical limitations. However, here once again is an overwhelming reason to embrace an offsite portal in the clouds. The one thing that is crucial, once that information gets there (in the clouds): security. 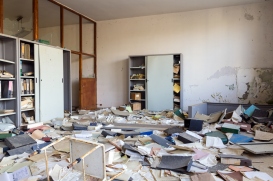 Ironically, one of the main reasons to go cloud-based is security. Hackers getting into systems “on-site” are now a thing of the past and can be done from a bedroom anywhere. Ironically, a cloud based system can be far more secure than an on-site-self-contained system. One of the dangers that await facilities like schools, hospitals, and airports in the future is known as “ransomware”, as has been widely reported in recent hacks for ransom globally. The use – or mal-use – of ransomware was dramatized in a recent Chicago Med show where a whole system was frozen with the culprits

demanding 30 bitcoins to release the freeze. The show highlighted the dependency upon computers which has become irreplaceable in our lives. Unprepared doctors were forced to thrust themselves back 50 years, without the help of even the basic diagnostic machines or the history of patients.  The system was eventually released when one of the doctors (no one knows who!) paid the ransom in an order to bring the hospital back to normality and potentially save lives. My guess is that this situation would have been avoided if the EMR system was cloud based. Watch the episode by clicking here.

The future will obviously include more electronics rather than less. Our world will go faster, be more connected, and less private (if we aren’t careful). This of course is a double-edged sword as the improvements in healthcare have never been more exciting. Whether you are discussing improved healthcare through IT, advances in regenerative medicine or other developments in the field of healthcare, the benefits of unprecedented ability to data mine (and develop treatments not identified before due to lack of data) has never been greater. Data mining has the ability to identify trends that will directly steer improvements in medicine and identify issues unseen until one drills down, which has the potential for patients to be treated anywhere / anytime through cloud based records or telemedicine…the opportunities are endless.  We aligned ourselves with the Quantum group because they had this vision 10 years ago and have championed it ever since. Their EMR Platform was designed from the start to be a true-cloud-based interactive system. By the way, healthcare was the last to embrace (still hasn’t fully) IT, and with this comes the opportunity. That’s why Grace Century is there!

It will be exciting to see where we are in 10 years.