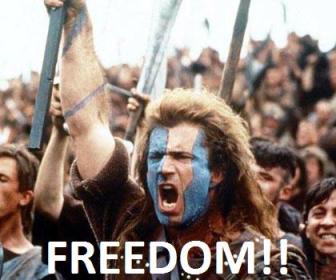 Well, some rules are made to be broken!

I never liked “Monday Morning Armchair Quarterbacks”. These are people who give all the advice in the world, after the big game, and someone who has never played.  I found myself in this position after watching the very close vote with Scotland’s Independence this morning.

Why would an American, with very little knowledge or understanding of the complex structure of the Commonwealth, care about the vote? It is because I knew that the true implications were unknown. It would have been far reaching beyond a change of the flag, and most forecasters were not even sure what it would mean.

The whole organization of the vote seemed odd to an outsider like me. Anyone living in Scotland could vote. Scots living outside could not. The age to vote on this was as low as 16. In a country where a 16 year old can drink beer, but not spirits, why would you give them the right to vote? All those guys in Braveheart that got chopped up, trying to be independent …and a kid can make a check mark? The ballots were cast and counted manually; in today’s electronic world? No majority was needed and no difference between the rural country side where virtually no one lives and the populated cities. It literally could have come down to one person. What was going on?

When Sean Connery (James Bond), who supported the “Yes” vote, abandoned the Queen and God and country, I was really confused.

We now know that the vote obviously went “No” …to stay in the United Kingdom.

As I watched the returns early Friday, I couldn’t help but feel that I was watching a game of “chicken”. This is where two cars go racing towards each other, staying on course until one blinks and swerves out of the way. The news coverage kept going back and forth, interviewing the two sides as results flowed in.  There seemed to be an obvious difference between the two. Both were patriotic, don’t get me wrong. Both loved their country …that was obvious. At the risk of sounding ignorant, it just seemed the two had different agendas.

The organizers had an almost surrenders tone from the beginning, but using the event as a warning to incumbent officials that their jobs were in jeopardy. This too was resonated by London commentators, who were already wondering what the political implications would be in upcoming elections—resulting from such a strong show of 80%+ Scottish voter turnout and a winning margin for the status quo of only 10%.

Personally, I think this was a very dangerous game. 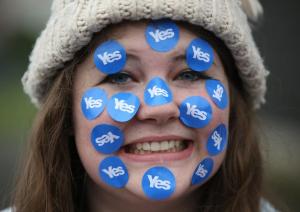 We have to ask what the “Yes” voters really wanted. Unemployment among the 16-24 year olds in much of Scotland is as high as 29%. I think it comes down to what “my man”– Bill Clinton — has always said, “Give a man’s family security, the chance to earn a fair living, access to healthcare, and you make large steps towards global peace”.

Again, it is just my opinion, but when you have a job …a future …opportunity, you don’t so easily throw the “baby out with the bathwater”.

Next up: Spain and the Catalans.